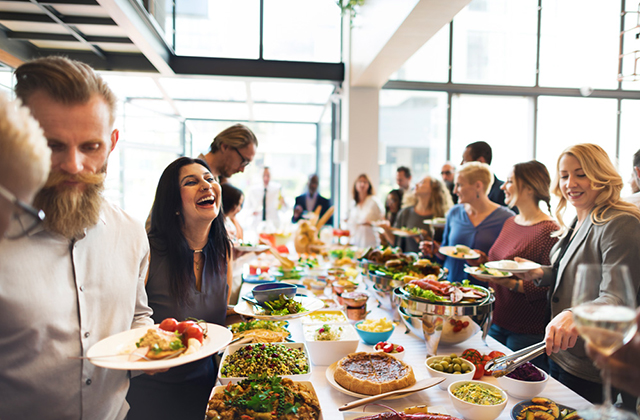 Melbourne’s beloved Italian restaurant, Ladro, offers much more than just pizza; it also caters to events for small function rooms Melbourne. For decades, drummers have had a real problem with playing small venues. With the trend of coffee houses, micro-breweries, wine bars and other intimate locations on the rise, the drummer is being faced with the challenge of supporting the tempo of the band, combo or duet while adding to the overall musical content and still not over powering the room. There have been several solutions devised to attenuate the drum heads, such as rubber and jell pads, felt, etc., but these changed the tone and quality of the drum and in many cases muffled the sound to a dull thud. Even then, the cymbals and hi-hat were still a problem.

So drummers turned to brushes. These worked well for jazz, blues and other genres of music that did not require a driving beat or the accents that only a sharp, bright percussive blow could offer. So where can drummers find a versatile instrument that can produce a variety of percussive sounds, without chasing an audience out of a small venue with fingers firmly planted in each ear?

The answer is hundreds of years old. The instrument is called a “Cajon”. It is a Spanish word that means “Box”. And that is exactly what it is. The present day Cajon is a six sided wood box that is played with the hands, just as a conga would be played. Four of the sides, (top, bottom, left & right), are solid and made of hardwood. The back of the Cajon is also hardwood, but has a port (or hole) in it to project the sound. It is also where you would mic the Cajon just as you would the port on a kick drum. The face (or front) of the Cajon is made of a thinner piece of plywood. This acts as the “head” of the drum, even though all sides of the Cajon can be used to produce different sounds. The box is usually around 20 inches high (including rubber feet) and about 12 inches square. The top of the Cajon can be covered with a rubber matt, thin cushion or other material for the comfort of the percussionist, who sits on top of the box when he/she plays.

Although the traditional Cajon’s were just the simple box configuration, today’s Cajon’s add features like wires or snares behind the front head to act and sound similar to a snare drum. The snare can be adjusted through the port in the back panel to suit the music and style of the percussionist. A few newer models even have a foot pedal on the side that allows the percussionist to engage and dis-engage the snare feature.

When played correctly, the Cajon can take the place of an entire drum set. And guess what? The lack of cymbals is rarely missed! Kick drum, toms and snare can all be achieved by “drumming” with the hands and utilizing the different surfaces of the Cajon. The sound is beautiful and warm, without losing intonation or sounding muffled. Depending on the style you choose, the Cajon can be matched with almost any genre of music and is perfect for those small venues. Here’s an added bonus: They only weigh about 18 pounds, case and all!! This means it may be the first time the drummer will actually be setup and torn down long before the rest of the band. Even if the rest of the band is just the acoustic guitar player sitting right next to you!

So where did this wonderful instrument come from? The Cajon has been traced back to Peru, when African slaves were shipped to Peru from Angola. The slaves were not allowed to bring their traditional drums and other instruments with them. So, in the absents of these instruments, the slaves would make percussion instruments out of crates, tables, chairs, etc. Often fruit and fish crates were used. Sometimes the lids were left unsecured so the player could slap the lid closed for yet another percussive tone. This option has been left off of modern day Cajon’s. Smaller crates were held between the thighs and larger ones played by standing behind or at the side. The Cajon reach a popular peak in the mid 1800’s and by the end of the 19th Century several different designs and construction methods were being utilized in the search for different and more unusual tones. Bent woods, altered shapes, and mixtures of wood surfaces were used. But the one design that worked best was also the simplest. The “Box”.

Simple, versatile, easy to move, fun to play, sounds amazing and perfect for the small venue. Once you try one, you will own one! A gift from the past and a lifetime of enjoyment… “The Cajon”

The Author, Darryl Mardirossian, has been passionate about music his entire life and is currently a member of the band Primrose Gardenz which began in 2001 as a duet and the birthplace of Melodic Rock!! With the musical talents of Johnny Walker (the man, not the drink) on Guitar and Vocals, Darryl Mardirossian on Bass & Vocals and Evan Mardirossian on Drums / Percussion, listeners take a musical journey spanning a lifetime of love, loss, laughter and tears. Together, this dual generation trio creates a fun, unique sound that appeals to all ages.
Listen to our music on iTunes or Spotify.